As well as biennial conferences, FIWAL has hosted numerous events that raise funds for charities nominated by its member associations. Funds are also raised to cover FIWAL  administration costs. Only some of our most recent events are shown below; please contact us if you would like information about other past events.

and we welcomed the accomplished and inspiring environmentalist Julia Hailes MBE, where she talked about ‘My Green Life’, covering her years from the time she got in trouble for refusing to accept an unwanted plastic carrier bag in a department store, to her unrelentless campaigning for a more sustainable lifestyle for the planet and her projects in Africa. Julia also shared with us some alternative ways to depart this world in a greener way.  Julia’s nominated recipient of funds from donations was to Operation Future Hope and Lesley Malpas gave us an enlightening overview of how this not-for-profit organisation is helping to inspire and educate the next generation about the urgent need for ecological restoration and the work that they are doing in rewilding, starting in schools.

February 2021
Continuing with the FIWAL@Home events, we welcomed the engaging costume historian and dressmaker, Meridith Towne for our fifth event: Meridith Towne – The Art of Power Dressing. Meridith

studied archaeology at Durham University, specialising in Oriental, Greek and Roman costumes and has many more achievements and accolades. Meridith’s talk took us through history and across the globe, explaining what power dressing is and how it is used to create a personal first impression in terms of style, symbolism, confidence and statement and is personal to each individual, a concept that has not changed throughout history.  Although we were not able to meet Meridith’s mannequins ‘in person’, her zoom presentation slides more than made up for this with the colour and images complimenting her very interesting talk.  We also had the pleasure of an introduction to the charity Dress For Success Greater London by Fionnuala Shannon, tying in with Meridith’s talk and outlining the charity’s work to empower women returning to the workplace. 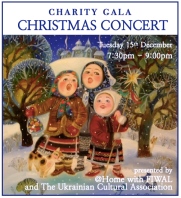 Ukrainian Cultural Association (UCA-UK), founded by internationally renowned composer and pianist, Alla Sirenko in 2020. Highlights from the programme included a mix of traditional carols in English and Ukrainian from the harmonious Ukrainian Vocal Quartet Vivo who sang Czardasz a composition by Italian composer Vittorio Monti. Alla played her poignant solo piece, Winter dreams which she dedicated to the Ukrainian children, who lost their fathers in a war in Eastern Ukraine. The concert was in aid of British Ukrainian Aid – for orphaned children. 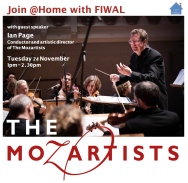 FIWAL had the privilege of hosting Ian Page, conductor and artistic director of the Mozartists, as our FIWAL @Home event speaker on 24 November 2020. Classical Opera’s Mozart 250 is a project that will run for 27 years, following the chronological trajectory of Mozart’s life and works, the objective being to show that this unique genius whose music transcended all limitations of time and geography was at the same time a product of his age and was shaped by the music of his contemporaries. Ian described how the project came about and used examples of musical recordings, along with presenting just some of his in-depth research of Mozart’s life, with a special focus on the period when Mozart came to London at the age of eight.

The October 2020 @HOME with FIWAL on Zoom event was held on Thursday, 1st October and featured Alexandra Asseily, speaking about the “Beirut Garden of Forgiveness.” Among many other responsibilities, Alexandra is the governor and founder of the Centre for Lebanese Studies. Since 1997 she has been involved in creating a garden in the heart of Beirut, and her talk focused on the origins of the garden and the unique characteristics of its features and design. Although construction started in 2003, work was halted in 2006 and after the chemical explosion in 2020 it remains uncertain when Alexandra’s vision for the garden will come into being.

FIWAL’s second @HOME with FIWAL on Zoom event was held on Tuesday, 7th July  featuring Dr Geri Parlby. Geri has a Masters in The History of Art and a Doctorate in Theology and is a regular speaker for the Arts Society. She is also an Honorary Research Fellow with the University of Roehampton. Her talk to FIWAL was entitled “This Won’t Hurt a Bit – Medicine in Art Throughout the Ages”. Geri’s very entertaining presentation showed us some of the bizarre, amusing and often startlingly realistic depictions of medicine in art throughout the ages. 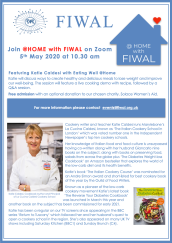 FIWAL’s very first @HOME with FIWAL on Zoom event was held on Tuesday, 5th May featuring cookery writer and teacher Katie Caldesi. Katie runs Marylebone’s La Cucina Caldesi, known as ‘The Italian Cookery School in London’ which was voted number one in the Independent Newspaper’s top ten cookery schools. Her knowledge of Italian food and food culture is unsurpassed having co-written along with her husband Giancarlo nine books on the subject, along with books on preserving food, salads from across the globe plus ‘The Diabetes Weight-loss Cookbook’ an Amazon bestseller that explores the world of the low-carb diet and its health benefits. Katie’s presentation looked at Eating Well @Home and included a wonderful at-home demonstration of how to prepare some delicious low-carb dishes. Here is the link to the recording of the Zoom session – and here is a link to the recipe she demonstrated for us. 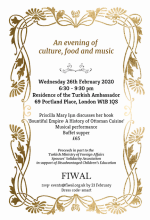 FIWAL’s ‘Evening of Culture, Food and Music’, was held on Wednesday, 26th February 2020 at the Residence of the Turkish Ambassador with proceeds in part going to the Turkish Ministry of Foreign Affairs Spouses’ Solidarity Association in support of Disadvantaged Children’s Education. Guests heard from Priscilla Mary Isin discussing her book ‘Bountiful Empire: A History of Ottoman Cuisine’ and enjoyed a musical performance and buffet supper.

February 2019
The President & Committee of FIWAL with the gracious permission of Mme Khawlah Abbas Muttair, spouse of HE Ambassador of Iraq, held a Very Special Afternoon Tea-Party on Monday 4th March 2019 at the Iraqi Residence in Holland Park. Guests enjoyed a magnificent spread of Iraqi food and were entertained by a charming young Oud player, Auction and Raffle. The proceeds from the event were be divided between an Iraqi Educational Charity & FIWAL.

FIWAL & The Azerbaijani Women’s Association in the UK held their Autumn Gala on Saturday, 17th November 2018 at The Lansdowne Club in Mayfair. An evening of music, a delicious dinner and an exclusive auction raised funds for the YARADAN Project for underprivileged children in Azerbaijan and FIWAL programmes.

February 2018
The President & Committee of FIWAL with the gracious permission of Datin Rosilawati Abd. Raffar, spouse of HE The High Commissioner of Malaysia held ‘A Romantic Valentine’s Tea’ on Tuesday, 13th February 2018 at the Malaysian Residence in Hampstead. Guests enjoyed a magnificent spread of Malaysian food and were entertained with songs by the High Commissioner himself, plus Poetry and a spectacular Valentine’s Raffle. The proceeds from the event were divided between a Malaysian Educational Charity for Underprivileged Children and FIWAL.

December 2017
FIWAL held  its Annual Christmas Tea Party & Carols on Tuesday, 12th December 2017
at The University Women’s Club.  Guests enjoyed a delicious tea in the elegant drawing room and were entertained by a Festive Raffle and the Club choir, singing their repertoire of traditional carols.

May 2017
The FIWAL Spring Luncheon was held Tuesday, 23rd May 2017 at The Churchill Hotel, with a Champagne Reception and delicious 3 Course Lunch. We were entertained with music from the Northwood Strummers  Ukulele Orchestra and a Grand Raffle.

February 2017
FIWAL and the New Zealand Women’s Association held a joint Valentine’s Champagne Tea on Tuesday, 14th February 2017 in the Penthouse, New Zealand House, with its wonderful view over London. After a special English Tea, guests were entertained with music, poetry and a Valentine’s Raffle.  Most of the proceeds were donated to The Red Cross NZ Earthquake Appeal 2016.

December 2016
FIWAL held its Annual Christmas Tea Party on Thursday, 8th December 2016, very generously hosted by Mrs Salwa Mayassi at her elegant home in Knightsbridge. Guests were served delicious Christmas treats and were entertained by a young opera singer and pianist with carols.  The superb Christmas raffle raised funds for a Medical Aid for Palestine.

February 2016
FIWAL’s 30th Anniversary Celebrations was kicked off with a lovely Valentine’s Tea party, held in the very attractive Terrace Bar and Grill at Le Meridien Hotel. Champagne and a full English Tea was enjoyed by FIWAL members and their guests.

May 2015
FIWAL’s Spring Luncheon was held at the Radisson Blu Hotel in Portland Square, London with fashion guru Alyson Walsh and music from the International String Trio.

February 2015
Champagne Tea to celebrate Valentine’s Day at the Turkish Ambassadorial Residence with a real taste of Turkey delicacies thanks to our kind hostess Mrs Esra Bilgic, wife of HE Turkish Ambassador.

May 2011
Monday, 9th May saw the celebration of the FIWAL’s 25th Anniversary with a splendid event held in the lovely surroundings of the Mayfair Hotel’s Crystal Room.  The festivities began with a champagne reception, followed by a superb lunch which was enjoyed by a large turnout of member from all of FIWAL’s affiliated clubs. The grand raffle, with some spectacular prizes, was generously supported and more funds were raised when two return tickets, generously donated by Turkish Airlines, were auctioned and raised a further £500 for FIWAL’s funds.

We were entertained by speaker, Dr Kate Williams, a charming young academic, author of “Royal Marriages”, who took us for a canter through British Royal marriages from their inception to the present day; very apt given the recent Royal nuptials.  She gave us all kinds of interesting titbits and brought history alive for us.

In her speech, retiring president Neena Dugal, paid tribute to FIWAL members, thanking them for their support during her 3 year tenure.  She was presented with a bouquet and warm thanks from the FIWAL clubs for staying on for an extra year. She was followed by FIWAL founding member, Jocelyn Jones who gave a brief history of the setting-up of FIWAL, outlining the ethos underpinning the idea, which has been carried on and expanded over 25 years.  We were also privileged to hear from past presidents and founding members Latifa Kosta and Anita Worral, the latter having travelled all way from South Africa especially for the occasion.

The FIWAL 25th Birthday party showed that the organisation is in very good shape and has grown and continues to grow in stature over the years.  We now look forward to the next 25 years and the 50th anniversary; perhaps some of us will still be around to celebrate! – Caroline Muir